Underpressure: the impact of vacuum distillation on essential oil quality

Have you ever tried cooking pasta atop a high mountain? OK, this is a weird introduction, but you’ll see the link. Everybody ‘’knows’’ that (pure) water freezes at 0 °C and boils at 100 °C and in everyday life, this is a good approximation for most of us (living at low altitude). But it’s not true in all conditions…

If you look at a water phase diagram (plenty available on internet), you will see that the water state (solid/liquid/gas/…) depends both on pressure and temperature following a quite complex pattern.

If you were cooking pasta (in boiling water) at the top of the Kilimandjaro, it would take much longer because the water at 81°C conveys less energy than that the water at 100°C, and the ‘’chemical breakdown’’ that occurs during cooking is much slower.

Hmmm… Chemical breakdown! Wait… Apart from some specific cases, that’s something we usually try to avoid or minimize during botanicals distillation. At least if we want to get a product close to what plants contain.

Here is why vacuum distillation may be interesting in some specific cases: the reduction of the pressure in the still comes with a reduction of the boiling point of the water and, conversely, of the steam temperature. Finally, cooler steam (containing less energy) usually induces less chemical breakdown, responsible for the formation of some undesired compounds or the loss of precious compounds.

We recently developed a vacuum kit that can be used with our 40 L still, the Explorer (Figure 1), to test the impact of pressure/temperature on the distillation of various botanicals.

Here is the first test we performed on Mentha pulegium (pennyroyal) essential oil (EO). Mints are being quite sensitive to chemical breakdown, generating still-notes during distillation[1]. A still-note is an off scent that arises from the distillation process, biasing the overall olfactive impression. The idea was to check if a mint EO distilled at lower pressure/temperature contained fewer chemical breakdown products recognized as being responsible for still-notes compared to an EO distilled at normal pressure. These compounds include dimethyl sulfide, 2-methylpropanal = isobutyral, 2-methylbutanal and 3-methylbutanal = isovaleral[2], but the literature on still-notes is quite scarce and this list is very likely not exhaustive.

Figure 1: The Explorer with the prototype of vacuum kit 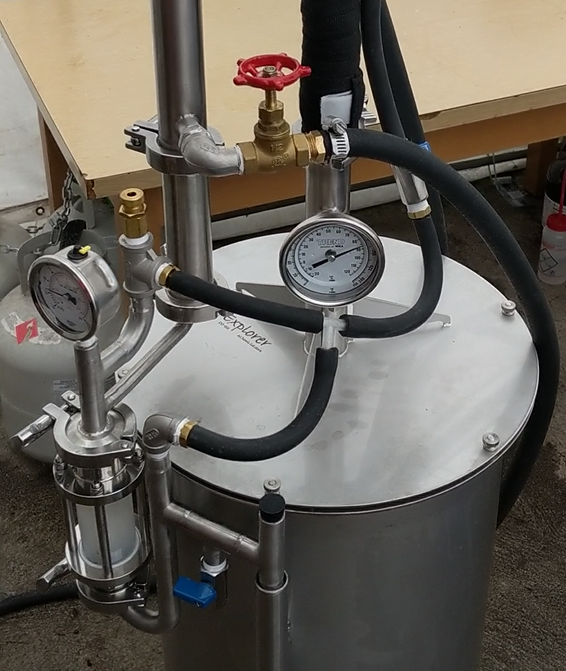 10 kg of Mentha pulegium (frozen just after the harvest) was steam distilled for 1h45 at normal pressure/temperature and a further 10 kg (same conditions) was steam distilled for the same duration at reduced pressure/temperature (≈ 55 kPa, ≈ 84°C). The EOs were directly stored at 4°C and analyzed by GC-MS and GC-FID within 24h after distillation. The first one (GC-MS) was used to identify each compound and the latter one (GC-FID) was used to double-check identifications and give the proportion of each identified compound. The results are reported in Figure 2 and 3 (most volatile fraction only shown)

Even if we’re not very far from the baseline and close to our quantification limit in GC-FID, we clearly see that the 4 compounds cited above are notably less concentrated in the EO distilled under reduced pressure/temperature. Chemically speaking, this is a good point regarding the quality of mint EO.

We can also notice that some other compounds such as 2-ethylfuran and 3-methylcyclohexanone follow the same pattern. The odor of 3-methylcyclohexanone is described as ‘’minty, camphoreous, medical’’[3] which does not really correspond to the still-notes description. As for 2-ethylfuran identified in many cooked foods, its odor described as ‘’sweet, burnt, earthy, malty’’[4] which fits a bit more that of the still-notes (in our opinion).

Regarding the odor of these EO, we’re not formally trained to make an odor description but we asked the whole team to compare them, and 8/9 told us that the EO distilled under vacuum had a more pleasant smell. This is in accordance with literature.[5]

In conclusion, each plant is unique and requires specific distillation parameters which depend on its nature and the objectives of the distiller. According to this experiment, as well as the literature, we think that vacuum distillation may be an interesting technique for plants that require a relatively short distillation time and that tend to generate noticeable still-notes upon distillation. It may also be an interesting technique when other undesired chemical breakdowns (i.e. esters hydrolysis) are observed. But as always, there are probably some plants for which vacuum distillation would not be the best choice for various reasons.