This poster (awarded a Poster Prize) was presented to the scientific community during the 50th International Symposium on Essential Oils in Vienna, Austria, on September 9th-11th 2019.

Click here to see the poster as a PDF. 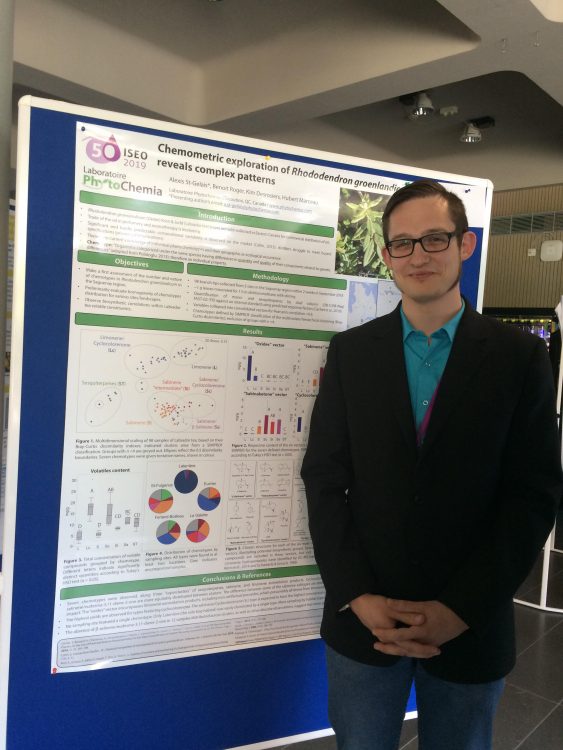 Thanks to Lavinia Alexandru for the photo.

Entitled Chemometric exploration of Rhododendron groenlandicum reveals complex patterns, it summarizes our findings after screening 98 individual plants of Labrador tea, collected from five different sites in Saguenay (Quebec, Canada) in September 2018, for the composition of their volatile constituents. This project was undertaken to see how variable this species was at the individual level, with the long-term objective to assist distillers in Quebec with their harvesting and distillation practices for the quite variable essential oil that is being produced from this species (Collin, 2015).

We analyzed the 98 extracts using predicted reponse factors (Cachet et al., 2016) and used statistics to obtain objective grouping of the samples into chemotypes. Figure 1 shows these groups in colours with proposed names, with samples pertaining to small clusters (less than four samples) ignored and therefore greyed out. This display shows the samples by dissimilarity: the farther two points are, the less similar they are. Seven chemotypes were shown, based on compositionnal data encompassing roughly 150 compounds.

Figure 2 then delves into what distinguishes these groups. In the course of the statistical treatments, compounds that strongly correlated (i. e. occured together consistently) were pooled together as single variables called “vectors”. The six vectors shown are the six most contributive to the difference between the seven chemotypes. The graphs compare the respective content of the various vectors of volatile compounds for each chemotype. Figure 3 presents the total yield of volatile compounds (mono- and sesquiterpenes) for each type.

Considering figures 1, 2 and 3, we can see that we have three “superchemotypes”. The first is dominated by sesquiterpenes (in green), and hardly contains anything else than sesquiterpenic molecules. The second is related to limonene, with two chemotypes. What differs between these two is the presence of cyclocolorenone and related compounds in one of the groups (Limonene/Cyclocolorenone), which also overall contains much more volatiles. This makes the “Limonene” group possibly the least interesting from a production perspective, since it lacks much specificity in its composition and only would yield little oil.

The third “superchemotype” revolves around sabinene, with four chemotypes determined. One of them again features cyclocolorenone, and it too tends to yield more volatiles than the other sabinene chemotypes (to the exception of Sabinene/β-selinene group, for which the difference is not significant). Otherwise, despite a trend for higher content in β-selinene in the Sabinene/β-selinene group (Ss), the difference between the three other types is possibly of little relevance in a production context, although statistically significant.

Figure 5 shows some representative compounds of the six main vectors of the study. The “Oxides” vector is worth discussing. Indeed, although the limonene chemotypes were given this name, limonene itself was not very prominent in those samples. The molecules observed were rather limonene autoxidation products (i. e. arising from oxidation in contact to air), like hydroperoxides and isocarveols. Since collection of the samples was late in the season (the plant keeps its leaves throughout winter), it is possible that biosynthesis of limonene has ceased for a while by that time. The relatively exposed trichomes producing the volatiles could therefore be favourable environments for oxidation reactions, unless this is the result of an enzymatic transformation over time. Pure limonene was submitted to our extraction procedure and remained intact, suggesting in any case that this behavior truly happens within the plant tissues. Exploratory sampling in 2019 suggests that younger leaves contain less hydroperoxides and more limonene.

It should be noted that peroxides are likely completely degraded during distillation. If they are present in the essential oil, this would be upon gradual oxidation following the distillation itself.

Figure 6 shows a hidden trend that is not observed on figure 1 otherwise. By looking at figure 2, the β-selinene vector appears to be relatively homogeneously distributed amongst chemotypes. The distribution histogram however shows that out of the 98 samples, 12 do not feature β-selinene (and related eudesma-3,11-dien-2-one) at all. The clear bimodal distribution trend observed here suggests that this could represent a cryptic chemotype, invisible by other statistical tools. This type would be expressed independantly of the others, since samples lacking β-selinene are spread accross several other groups. Other anecdotal observations suggest even more chemotypes could be present, overall offering a quite complex picture of chemical diversity in Labrador tea.

We hope to keep working on this subject in the future to help distillers working with this complexity.